Video has emerged of Jacob Rees-Mogg joking about a Christmas party held at No 10 last year, despite gatherings being forbidden under COVID rules. He was recorded saying: ‘This party is not going to be investigated… 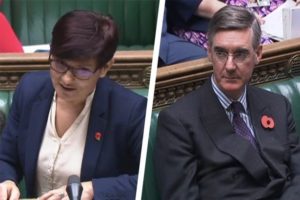 A Bristol MP has slammed Jacob Rees-Mogg after a video showed him joking about an alleged Christmas party in Downing Street while strict Covid restrictions were in place last year.

A video from the Institute of Economic Affairs’ Christmas bash on Monday evening (December 6) shows the Leader of the House of Commons joking about this alleged party and the social distancing rules in place.

In a video published by the Guido Fawkes blog, Mr Rees-Mogg is seen delivering a speech as the guest of honour at a Christmas party at the Institute of Economic Affairs (IEA) on Monday, December 6, five days after allegations of last year’s party had been first reported by The Mirror.

He told the gathered crowd: “I see we’re all here obeying regulations, aren’t we?

Mr Rees-Mogg then joked: “And this party is not going to be investigated by the police in a year’s time.

“You are all very carefully socially distanced – we have moved, I am pleased to tell you, back to the Imperial system: I notice you are all two inches away from each other which is, as I understand it, what regulations require.”

The Conservative MP for North Somerset has come under heavy criticism this morning for the speech in the wake of ITV News publishing a leaked video. The clip showed Downing Street staff joking about an alleged party that took place after the government had banned Christmas parties as part of Covid restrictions imposed at the time.

Reacting to Mr Rees-Mogg’s comments and the leaked video, Labour MP for Bristol West and Shadow Leader of the House of Commons, Thangam Debbonaire, said: “The PM and his mates think they’re above the law. They think they can repeatedly break the rules we’ve all been following to keep ourselves and others safe. And when they’re found out, it’s all a big joke.

“People in the South West – and across the UK – made huge sacrifices over the last two years. They tell me they have had enough of this incompetent Prime Minister and his ministers, who have often seen this pandemic as an opportunity to make money instead of a public health emergency.