Some social media users have claimed that Omicron was the name of a 1999 video game developed by the Bill Gates-led Microsoft. India Today Anti-Fake News War Room (AFWA) has found the claim to be a conspiracy theory. 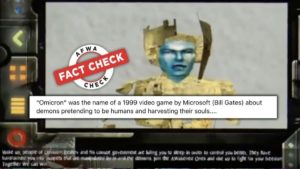 While Omicron continues to puzzle scientists, a section of netizens keeps persisting that the Covid pandemic was pre-planned by big industrialists such as Bill Gates to control human population and ensure that they profit out of their own vaccines.

More recently, some social media users have claimed that Omicron was the name of a 1999 video game developed by the Bill Gates-led Microsoft. According to them, the game was about “demons pretending to be humans and harvesting their souls”.

“Coincidence much?” they question. 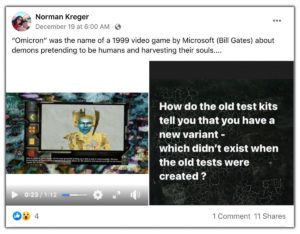 Anti-Fake News War Room (AFWA) has found that this is yet another conspiracy theory. The game was created by a French company and not by Bill Gates or Microsoft.

We found that the actual name of the video game that netizens are talking about is “Omikron: The Nomad Soul”. It is to be noted that here, “Omikron” is with a “K” and not a “C”.

This video game was created in 1999 by Quantic Dream and published by Eidos Interactive. Quantic Dream is a French video games developer based in Paris and Montreal, founded by David Cage in 1997.

The video game was released on Microsoft Windows platform in 1999, and later in 2000, it was released on the Dreamcast game console. Microsoft or Bill Gates did not create or publish “Omikron: The Nomad Soul”.

The video game is set in a futuristic city called “Omikron” in which people are ruled by an ancient super-computer and a communist dictator who carries out the computer’s orders. The Nomad Soul, a foretold hero, enters Omikron through his computer and becomes trapped in this alternate realm. Characters in the game combat to save their souls from being trapped by the demons.

The soundtrack was provided by legendary musician David Bowie.

The World Health Organization in May 2021 had decided to name the key variants of coronavirus using Greek alphabets. Omicron is the 15th letter in the Greek alphabet order.

Hence, the viral conspiracy theory linking Omicron to a 1999 video game and Bill Gates is baseless. Earlier, AFWA had debunked several claims made on Bill Gates and Covid, which can seen here.

Bill Gates had created a video game called “Omicron” in 1999. The game was about demons pretending to be humans and harvesting their souls. Is it mere coincidence that the same variant is ravaging humankind in 2021?

This is yet another conspiracy theory. The actual name of the video game was “Omikron: The Nomad Soul”. It was created by a French video game developer and not by Gates or Microsoft. 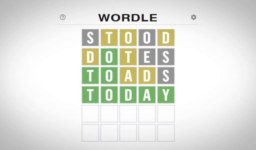 How to Play the Worlde Game, a Free Online Game ... 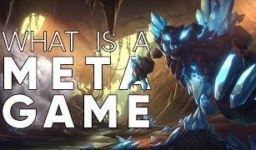 Meta Meaning In Gaming - What Is A Meta Gamer? 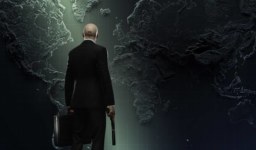